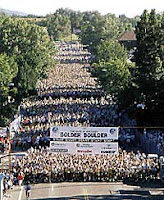 If you have read any of my blog posts you know that I love lists and rankings, especially when one of our local communities makes it on a good list. Fortunately for us here in the Boulder area that happens often, like this time in the RACE to economic recovery for towns and cities across the country.

Some cities are likely to recover more quickly from the housing downturn than others. And aren’t we lucky to live in one of them! Forbes.com just named Boulder, CO to its list of the 10 Best Cities for Recession Recovery in the US. We are all familiar with the cliche that the three most important things in real estate are location, location, and location. This is true for recovery from a housing market crash too. Economists expect the national economy to return to growth later in 2009, perhaps as soon as this summer, and Boulder is poised to lead that recovery in Colorado.

Forbes used projected gross domestic product data from Moody’s Economy.com as well as unemployment figures from the Bureau of Labor Statistics, and home prices, incomes and affordability data from the National Association of Home Builders. Because, in general, healthy cities were not victims of as severe a housing collapse, home prices were not used in ranking the cities poised for recovery. Well thank goodness for that! In the city Boulder real estate remains strong … the median home price for May 2009 was $499,900 while the average topped out at an incredible $643,454. Lafayette, Louisville, Longmont, Broomfield, Superior, Erie and Loveland/Berthoud real estate markets all remain affordable options near Boulder with median home prices in the $200,000-400,000 range.

The Boulder area’s Gross Domestic Product (GDP) was reported at $15.6 billion and projected to be $16.3 billion at the end of 2010. Unemployment in the area is running a low 5.7% compared to a national rate that is creeping up just under that scary double digit mark. The University of Colorado provides an abundance of stable jobs for the region. Boulder is also home to a number of high-tech laboratories. Moody’s projects the economy of Boulder will dip less than 1% before growth resumes in the first half of this year. My family and I were out Saturday night getting a bite to eat, and with restaurants like Jax Fish House and The Med telling us that wait times for our party of four would be over an hour to an hour and a half, it sure doesn’t feel like there is a recession here in Boulder! Could it be because Boulder is BOLDER? (yes, pun intended!)