Modest improvement … deals but no steals … new companies sniffing around the Boulder-Longmont-Broomfield corridor … those are the words on the street.  “Colorado is expected to add 10,100 jobs in 2011, with most sectors showing some growth,” according to economist Richard Wobbekind of the University of Colorado.  Most area experts think that Colorado’s economy will track with the national economy and show slow, steady growth over the next year.

The holidays are always a slow time for home sales, and this year was no exception.  But there is some pent up demand and we are seeing that start to trickle into 2011.

Approximately every other week Colorado Landmark provides detailed information on the real estate actvity in Boulder and Broomfield Counties from the past two weeks. Hopefully our analysis will help reveal what properties are selling, at what prices, how long they are are taking to sell, and other relevant information about what’s going on in OUR local area – Boulder County and Broomfield County.

For the two week period from January 1 through January 15, 2011 here are the numbers: 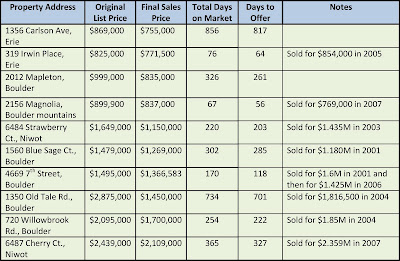 It never ceases to amaze me that each period’s Top Ten numbers reveal an obvious trend or relevant market statistic.  This period the disappointing news is that our area is definitely seeing negative appreciation in the upper price brackets.

All but one of the homes in this period’s list sold for over 80% of their original asking price, which in this market actually isn’t that bad for these upper bracket price categories.  The home on Old Tale sold for an embarrassing 50% of the original asking price, and it took over 700 days to do it!  My guess is that if this had been priced in the $1.8-2.2M range it would have sold quicker, and the owners would not have left so much money on the table.  Someone really missed the mark on that one!

But the real story here is the negative appreciation.  Six of the ten homes on the list sold for less this month than they did in previous years from 2003 to 2007.  That time period was our boom, when buyers were scrambling to find good properties, willing to pay anything, and realtors were just taking orders.  We live in a “new normal” now as one of our associates said to me the other day.  Homeowners can’t assume that their housing is going to be a big money-making investment, and realtors need to provide more analysis and be willing to turn down a listing opportunity if the seller can’t be realistic about the pricing.

The takeaways here for me are the following:

Finally, some shameless plugs for our company … Colorado Landmark, Realtors represented buyers and sellers on 4 sides of the above 10 transactions (or 20 sides total) and we were the only company to participate in more than one transaction on this list.  Also, kudos to Colorado Landmark broker associate Michelle Clifford for selling her listing at 6487 Cherry St.  She priced it well and it sold for 86% of the original asking price, not bad for a property over $2M, and it sold in a year, which is to be expected for a property of this caliber and price point.  Congratulations Michelle!